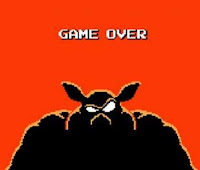 This is a toughie. As of November 1, DirecTV is no longer carrying G4. Citing the need to preserve "programming that is more relevant to our larger customer base" (ouch), DirecTV decided to pull the plug, leaving its ~18M subscribers without "Attack of the Show" and "X-Play" and..."Campus Cops". That's gotta hurt, considering how much that network has struggled since its inception. As a G4 viewer (and DirecTV subscriber), I'm disappointed, but honestly, ever since I picked up an iPod Touch, I've mostly watched X-Play via the clips on their mobile app. You can read G4's response to DirecTV's decision here.

It's a shame, but ultimately, G4 has had plenty of time to make a case for its existence. The mostly-male, mostly-young game-buying public has LOTS of disposable income to spread around, so it is really astonishing that G4 could never seem to get traction with its target audience. I guess G4 is still available with plenty of other carriers (how many?), but DirecTV's actions clearly doesn't bode well for the longevity of the network. If only they were listening back in January of 2008, they might have avoided this mess.
Posted by Matt at 4:12 PM