In preparation for my recent summer vacation, I was super-duper excited to pick up Dragon Quest IX: Sentinel of the Starry Skies for the DS. After Dragon Quest VIII sparked my interest in the series (and also became one of my favorite games of all-time), the idea of the next "proper" entry in the franchise had me salivating. Of course, the game came out in Japan almost a year ago, and Square Enix took their time giving the title a proper localization for the Western hemisphere. To tide us over, we had the DS remakes of DQ IV and DQ V, both of which were awesome and enthusiastically consumed by Yours Truly. (I even wrote about them here.) I am really hoping Dragon Quest VI: Realms of Reverie gets a North American release; if not, it will be the first game I import from Japan since that Shonen Jump DS fighting game.

Interestingly, DQ IX has been published in the States by Nintendo, not Square-Enix. As a result, the game has received the assistance of Nintendo's marketing machine, and I really hope it pays off. (For selfish reasons, of course: if kids buy this game, maybe we'll see more like them in the future!) Having spent 6-8 hours with the game, I can happily report that it is very Dragon Quest, and very, VERY fun. There have been some nice additions to the formula, including a deeper skill system and a more robust character creator. (Although, the level of customization that is promised in the unfunny Seth Green commercial oversells it a bit.) However, I have to level a significant critcism about the game, and that is related to its graphics.

I'm sorry; I don't know another way to say it. Normally I do not get too preoccupied with a game's graphics, however, previous Dragon Quest games have set the bar pretty high. In DQ IX, The 3D character models look okay when zoomed in up close in the character creator, but when moving around the game proper, they look grainy and compressed. When running through a town with a full party, the game often chugs. And in battle, the animations are awesome, but the characters look blurry. Toriyama's monsters, which often sport the best character designs in a DQ game, sometimes look like messy blobs of color. When I play the game, I squint my eyes, hoping it isn't true. But it is. Even the world environments are drab and mushy. Two final things to say on this matter: 1. I have skimmed the reviews, and no one seems to mention this complaint, which I find surprising in this world of graphics whores. 2. The game would have looked better in the 2.5D of the DS remakes. Just sayin'.

Nevertheless, my enjoyment of the game is not really diminished overall because of the graphics. There is so much to do, and the level of challenge makes exploring a pleasure. However, don't be fooled by the "no random encounters" claim...monsters will descend upon you even if you try to run around them, so it's not like exploring dungeons becomes trouble-free. With my limited time with the game, I feel like I have barely scratched the surface. (Hell, it took me 2 or 3 sittings to get through the INTRO of the game.) I've got alchemy pots, monster collecting, and who-knows-what-else to look forward to! Let's hope for an equally amazing DQ X on the Wii. 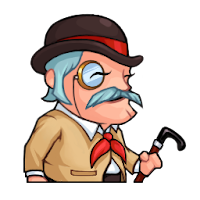 In related news, I picked up Henry Hatsworth in the Puzzling Adventure on Amazon for $10. As you may have heard, this game ROCKS. I love it for many reasons:

1. Genre mash-up. (Platformer plus puzzler.) Great idea and makes for a frantic pace.
2. Platform-specific. The game was designed for the DS. I suppose you could switch between the platforming and the puzzling on a single screen...but it wouldn't be the same. iPhone remake?
3. Polish. EA poured a lot of love into this game. The graphics, the menus, the sound, music and overall presentation are all fantastic. And funny! (Well, maybe more "clever" than "funny".) You can even get the entire soundtrack on the official site. Seriously, "hats off" (pun intended) to the team that developed this gem!

Unfortunately, I don't think the game performed very well despite the positive reviews, so a sequel may not happen. And another note: I am only about 25-30% through the game, but from what I understand (from reviews like this one), the game becomes miserably difficult later on. This is unfortunate. I hope I don't have to put down an otherwise fantastic game because it becomes too frustrating to play.