Ni no Kuni ("The Another World") Trailer

Everyone loves a good deal, and this one put me in a fine mood. Big ups to CAG for posting this! Blur is on sale at Best Buy this week for $39.99. Use this manufacturer's coupon to knock another $20 off the price, and combine it with a Best Buy Reward Zone coupon for another $10 savings. Fantastico! Note that this deal is only good in-store. And you might want to hurry, because I bought the next-to-last copy in the store that I visited.

Speaking of, wanted to grab Alan Wake as well, which is also on sale this week, but they were sold out. ("Sold out" -- what a 20th Century term!) Fortunately, the $39.99 price is also available online. Vrooom!
Posted by Matt at 1:28 PM No comments:

Among the many cool things Nintendo revealed at E3, Kirby's Epic Yarn is one of my favorites. I am not the biggest Kirby fan in the world, but the game's incredible art direction nearly demands a purchase on looks alone. Nintendo gets mad props for their E3 presentation, which treaded familiar ground (as usual) but also offered some neat surprises. And not a space marine in sight.

On the other hand, Microsoft had a strong showing but spent way too much time on their extremely underwhelming (and derivative) Kinect software. The only thing that really has me interested is the "Your Shape" fitness game from Ubisoft, which seems to do some very cool things with the skeletal/body recognition capabilities of the Kinect device. Sony sort of landed between the two, in my opinion, with an entertaining (but way too long) presentation that focused heavily on 3D gaming. Seriously, Killzone 3 looks (graphically) fucking unbelievable. And the Move stuff appears to be a lot more creative and interesting that the Kinect games. Though Kinect seems to be more of a technical marvel than Move, Sony's conference proves that it's really all about the software.

So if I had to rank the "big three" presentations at E3, I would give the crown to Nintendo, followed by Sony and then by Microsoft.
Posted by Matt at 10:16 AM 2 comments:

Writer John Young from Entertainment Weekly writes an engaging piece about Microsoft's "coming out" party for the Kinect motion device, held earlier this week at the Electronics Entertainment Expo in Los Angeles. I don't know what party Mr. Young attended, but I was there and my experience was completely different. Here are the highlights:

- Upon arrival outside the Galen Center, I couldn't help but notice the long line of attendees stretching around the venue. Fortunately, Microsoft had their guests' comfort in mind. Spokesmodels clothed in metallic bikinis were zipping back-and-forth on Segways, providing each guest with a miniature green beanbag chair in the shape of the Xbox 360 logo.

- Nestled just a few hundred yards from the front doors, I found myself seated between two professional bloggers from Ohio. We chatted casually about journalistic integrity and whether or not games are truly "art". Before I could make an auteur argument, my beanbag chair began to flash like a beacon and a seven-foot Samoan dragging a rickshaw suddenly appeared at my side.

- Apparently, it was my turn to enter the venue. The Samoan gestured to the rickshaw, and I happily climbed aboard. Inside the cabin, there was a beveled cavity on the floor in which I was directed to place the beanbag. Hanging from the ceiling of the cabin, I found a pair of Bluetooth-enabled wireless headphones. As I settled into my beanbag and slipped the headset on my head, the rickshaw lurched forward at a surprising clip.

- There was a personalized message from Sting playing on a loop in the headphones. He invited me to "prepare for the next step in human transcendence."

- The rickshaw deposited me in a large vestibule outside the arena proper. The floor was dotted with small inflatable pools, all glowing green, which were filled with bioluminescent plankton, also glowing green. I stepped out of the rickshaw. My driver removed the beanbag from the cabin and quietly deposited it into one of the bioluminescent pools. The beanbag, either water-soluble or appetizing to plankton, immediately began to dissolve.

- As the rickshaw retreated from view, a woman in a kimono appeared. She silently handed me a glass of green tea and gestured that I remove my shoes. She placed my shoes in a Lucite cube and gave me a pair of sunglasses, which I had to awkwardly place over my regular glasses. She also handed me an inflatable guitar, like the ones we handed out at my Bar Mitzvah. Fortunately, it had a strap, because I almost spilled my tea! That would have been embarrassing.

- The Samoan returned, and a bewildered Geoff Kieghley (Spike TV) descended from the rickshaw behind me. Time to get moving, I guess. Two members of the Blue Man Group emerged from the shadows. One hoisted me onto his shoulders while the other took my green tea and handed me a cocktail. We proceeded to enter the arena.

- Throbbing techno beats immediately assaulted my ears. The music appeared to be coming from all around me. I could feel the bass pulsating against my torso. Then I realized that the music was actually coming from lightweight speakers embedded inside the inflatable guitars that each guest was carrying! (On the topic of guests, there were probably a couple of thousand people at the event.) I noticed that everyone's sunglasses were glowing a different color.

- Not sure what the cocktail was that I was drinking, but I was definitely getting a nice little buzz.

- The Blue Man put me down in a small crowd of guys, all wearing sunglasses that were glowing violet. (I suppose I was a member of the violet group.) Now, I say "guys" because nearly everyone in attendance was male. Some of them, by the way, were very sweaty and possibly on their third cocktail. I would have introduced myself, but the inflatable-guitar music was simply too loud.

- The center of the arena was outfitted with a huge stage that was slowly rotating a full 360 degrees. It was fashioned to look like a giant Merry-Go-Round, but I noticed that the carousel animals were actually alive! I identified elephants, camels, rhinos and narwhals, each emblazoned with a different color of phosphorescent paint. The sides of the animals were decorated with Egyptian hieroglyphics. I only found out later that the symbols spelled out, "Get ready for breathlessness."

- Actors and actresses dressed like members of the typical American family were riding the animals. The carousel began to speed up. The actors began to look concerned. The music from the inflatable guitars was getting louder, more chaotic. Faster and faster. Everyone's sunglasses were flashing in time to the beat. The music reached a crescendo. I started to wonder when they were going to serve food, because I had skipped lunch.

- Suddenly, a huge pyrotechnic explosion in the center of the arena! The inflatable guitars burst in unison. The people riding the Merry-Go-Round suddenly flew up into the rafters -- they were wearing harnesses! I hadn't even noticed. The animals descended beneath the arena and a huge four-story ice sculpture in the shape of a human hand rose up from below the stage. Smoke was everywhere. I needed a bathroom.

- A booming voice declared, "Man's most important resource. His hands. Forging everything from the earliest tools to the tallest skyscrapers. But in the future, even this most versatile instrument will be unnecessary."

- Dozens of half-naked children, dressed like angels, descended from the ceiling holding an enormous LCD screen. A knight on horseback dashed toward the stage, holding a lance that was on fire. He struck the screen, and the word "KINECT" appeared, spelled out in flames! It was truly amazing. The ice sculpture of the hand began to melt as a result of the heat, which I could feel against my face. The knight galloped out of sight.

- Microsoft had delivered their message with pinpoint accuracy. Clearly, this new Kinect device was going to revolutionize gaming. And it would not require a controller. Or hands.

- As the fires were extinguished, the LCD (which must have been fire-resistant) displayed an image of the crowd. Our sunglasses were flashing like mad. And then, the sunglasses lit up in a pattern, spelling out Kinect's launch date and price point -- which unfortunately, I cannot publish here due to embargo.

- With that, Microsoft SVP Don Mattrick (awkward as ever) took the stage to introduce Sting, who immediately launched into "Walking on the Moon" while the angel children, now dressed as astronauts, floated above.

- I found out later that Sting played two 45-minute sets. But I went back to the hotel to take a dump. I discovered my shoes waiting for me on the bed. The Lucite cube was mine to keep. 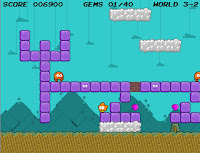 Just picked up indie game Eversion on Steam for $4.49, pretty much on sight alone. I mean, look at those funky-fresh retro graphics! The trailer describes the game as "a razor in an apple" -- a lovely description that seems to be apt. The summery, happy designs mask a darker side lurking below the surface. The basic mechanic appears to be that you can flip-flop the 2D world to make certain impassable objects passable, bring platforms from the background to the foreground, etc. However, by level 2 there appears something more sinister going on...details forthcoming!

Terrible title, by the way. But totally fun so far.
Posted by Matt at 12:00 PM No comments:

I have passing interest in both Blur and Split/Second, but then I saw this ad. And then I put Blur on my Amazon wish list.
Posted by Matt at 2:23 PM No comments: