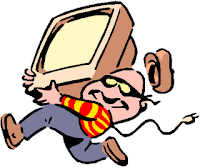 I just have to make a quick comment on this whole Gizmodo/iPhone thing, because it has been bugging me. First of all, I don't own an iPhone, and I really don't give a shit about the new iPhone, other than I like to know what is going on with technology. In fact, even though I love my iPod, I find "Apple-mania" to be rather sickening and the gushing over the iPad to be borderline stupid. (Even though I think the iPad is pretty neat.) So I just want to frame these comments properly. Forget the "found or stolen" debate and the "attempts" to return the device, and ignore Gizmodo's seemingly obnoxious and rather flip attitude about the whole thing. Consider their "supreme dick move" for a moment, which was to publish the name of the guy who allegedly lost the prototype phone in the bar.

For the record, I purposefully did not seek out this guy's name or follow any of the blog posts about his identity. However, I have to disagree with the people who find this person to be tangential -- or irrelevant -- to the main story. Sure, his "name, photographs, and personal information" are irrelevant, as the Daring Fireball blogger (above) points out. However, his role is most certainly NOT irrelevant, considering it was his act of "losing" the phone that created the story in the first place. I mean, we can ASSUME that leaving the phone in the bar was a mistake, but in this day and age, isn't it plausible that the whole thing was a marketing set up? I mean, here I am, a guy who doesn't really care about the next iPhone, blogging about the next iPhone.

Okay, the "marketing ploy" suggestion is far-fetched. But back to the guy who lost the phone. I don't want to know his name, or his address, or what he looks like. But I certainly would like to know what his role is at Apple. This is RELEVANT. Is he a junior staffer? Is he a director or senior engineer? A consultant or vendor? Is he a CTO? For that matter, was he a CTO's kid who pilfered the phone from daddy's briefcase to show his frat buddies? I guess he wasn't, but it is certainly possible, and knowing more about the guy will shed light on the story. Was he well-respected in his department? Was he a problem employee? Did he sneak the phone out of the office? All interesting things to consider.

And point of fact: Gizmodo clearly doesn't give a shit about any of those questions. That's the kind of thing they teach you in journalism school, right? Work that requires actual effort! Gizmodo wants to get page views, plain and simple, and they will open their checkbook to do so. And like the majority of douchebags and "journalists" on the Internet, they want to start little fires and get as many people as they can to show up, scruples be damned. I think it's offensive and lame, and I hope Apple's army of lawyers descend upon Gawker Media while "Ride of the Valkyries" plays from on high.
Posted by Matt at 9:22 AM