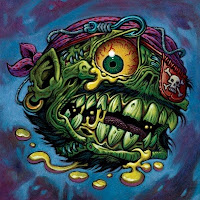 One of the weirder licensed titles to show up in recent memory is the XBLA/downloadable game, Madballs in Babo: Invasion. I played the demo of this pretty fun arcade shooter on XBLA, but never did get the full version. Well, this weekend it should be on Steam for $2.50, so there's no excuse not to pick it up. It looks like there are a whole bunch of add-ons for it, as well, and I think they are on sale, too.

The Madballs license is an especially random feature of this game. I have a sneaking suspicion that the developers were sitting around going, "Gee, what kind of license can we slap on our sphere-shooting game? One that we can afford, of course? Orange Growers of America? Hamster Ball Manufacturers, Inc.? MacManus Globe Company?" (Sound of gears turning in the conf. room.) "Oh, how about that crappy Madballs license from the 80s? I hear they are putting those out again!"