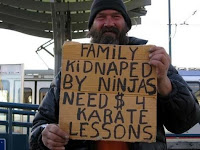 So I am all for entertainment that walks the line between "good" and "bad" taste, but Bumrise ("Europe's most popular onlinegame [sic]") kinda makes my stomach turn. In this browser MMO, you play as a homeless person, collecting bottles and getting into fights. It's actually kind of clever when you think about it, but the game's worst offense appears to be that it isn't very clever at all. Or, more to the point, isn't very smart. From the site description: "In contrast to other on line games, Bumrise takes an actual social them [sic] as the foundation of the game, combining it with satirical content and humor." Yeah, hilarious. Can you sleep in graveyards to regain health? Or dig through the dumpster behind Dunkin Donuts? Because that might actually be funny. This, on the other hand, is just...I don't know...sad.

(Kind of like the feeling I get when I watch the parade of retards on Tim and Eric's otherwise pretty hilarious Adult Swim show.)

And if video games often provide some form of wish fulfillment, who really wants to play as a bum? The whole thing just feels busted and crappy to me. Or maybe I'm just getting old.
Posted by Matt at 9:59 AM