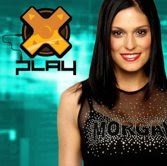 In case you weren't watching G4 this week (likely), you may not be aware that their flagship game review show "X-Play" got a complete reboot, with a new format, new set, new packaging, etc. In general, it seems that the show has improved a great deal. After watching the first three "new" episodes, I wanted to get some thoughts down about it.

But first, let me just say that the general opinion that "G4 SUX" is way too simple-minded. In theory, an entire network devoted to games, girls, gadgets and geeks (are those the four Gs?) sounds like a great idea to me. (Not to mention something pretty attractive to advertisers.) And yet, G4 fails on so many levels, with only two programs -- "X-Play" and "Attack of the Show!" -- having any merit whatsoever. It's terribly disappointing, especially when you consider X-Play's first home was on TechTV, a far superior channel with a lot less pandering going on. (RIP, TechTV.) Now, I started watching "X-Play" when the sun was setting on TechTV, and I've watched it ever since. I like the show. I like Adam. I like Morgan. I think their writers are smart, and I like their turns into sketch comedy and bizarro stories. Truly, when "X-Play" was firing on all cylinders, there was nothing else like it on TV. I had to endure ridicule from fellow gamers when I asserted that "X-Play" was actually pretty good; these arguments generally devolved into the "G4 SUX!" category fairly quickly. Yes, the majority of G4's programming sucks, but like I said, this is a simple-minded opinion. The network's real problem is that it doesn't have an identity. From strange stunt programming like "Star Trek 2.0" to "real" network throwaways like that terrible street racing show -- not to mention the abysmal "Code Monkeys" -- G4 has a long history of throwing shit at the wall, with very little in the way of stickage.

Though "X-Play" and "Attack of the Show!" are surrounded by idiots, that doesn't mean that they are geniuses. There were lots of things wrong with X-Play's old format. The lower third (and often the left and right third) were usually jam-packed with crap and useless chatter...can I please just watch the show? (Sometimes the lower third blocked the review score!) The comedy bits were sometimes self-indulgent ("X-Play Boards" anyone?) and missed just as often as they hit. The graphics packages were pretty bad, and the 22 minutes of actual show had very little in the way of pacing. Not to mention the annoying video viewer mail: "When is Halo 4 gonna come out?" But! Adam and Morgan are both quality hosts, and actually know about the games that they review. (Morgan ain't bad to look at, either.) Some of the comedy bits were incredibly inspired, with sharp writing and charming performances. It was clear thet everyone on the crew was having fun. Who wouldn't like Drunk Link, Screaming Intern, etc? Many of the recurring features were great as well: Games for Cheap Bastards, Spoiler Theater, Kratos, Crazy Adam's, etc. There was a lot to like. I still love the "Fear and Loathing" parody that sent Adam and Morgan out to the desert looking for the buried E.T. carts. Or when Adam went to interview the LARPers in the middle of the woods. And the French Guy. Not to mention the meat of the show -- the reviews -- which were pretty reliable and insightful. (Even though jokes sometimes took the place of an actual review.) On the whole, "X-Play" is a good show, and something I've watched regularly for a long time. So kudos to those guys.

Now the program has a whole new deal. It's not just about reviews. "X-Play" is trying to stay topical with daily news, a tough thing to do in this blog-happy universe. But they seem to be doing a good job, picking the important stuff. There also seems to be a bigger emphasis on previews and interviews with actual developers -- something I'm very happy to see. The graphics have improved a TON...even though the screen still gets jam-packed with junk from time to time. The set has been spruced up (again) and it looks like Adam and Morgan have new wardrobe people. Not everything is good, though. Some VP from Microsoft appeared in the first or second episode to spew a bunch of pointless PR garbage. And the reviews seem to have taken a back seat. But at least they got rid of that annoying Joel Gordine for the Gaming Update.

On the whole, "X-Play" now appears to be an actual SHOW, and not just a bunch of funny dorks having a good time. Which makes the comedy bits feel all the more out of place now. "Quentin Tarantino's Zelda" was hilarious, but it was sort of like the cast of "Whose Line Is It Anyway?" showing up on Wolf Blitzer's set to play improv games. (That "Mass Effect" parody was clever, but took all the air out the show.) Seriously, those dudes are funny and can put together some great bits. Why don't they have their own show? Why do we have to suffer through "comedy" like Code Monkeys?

(Talk about a missed opportunity. Some day I will post the pilot for "My Three Dragons" and explain how 8-bit comedy is done.)

Anyway, I'm not sure why I decided to write this!! I think it's because I feel some kind of kinship with Adam and Morgan or something. I've watched them for a long time! I appreciate what they're trying to do with "X-Play" and it must be frustrating to be part of a broken and directionless network. (Who knows if they are even profitable?) Maybe...I would relish the opportunity to try and "fix" G4? God help me!

At least "X-Play" is still the best thing G4 has got going. Adam and Morgan can get some satisfaction from the fact that they are the King and Queen of the Nerds. If they happen to be reading this, good work and good luck!
Posted by Matt at 9:16 AM