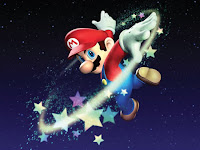 Hooray! Super Mario Galaxy is here, and my pre-order should be arriving tomorrow. Fortunately, I just finished Metroid Prime 3, so I'm ready for some hot Italian plumber action. At some point, I'll post some thoughts about Prime. But for now, that blonde bounty chick Samus Aran is totally upstaged by Mr. Mario.

Now, I love game blogs. They are great for the daily dose of the web's best game news and clips, but in terms of thoughtful insight...well, not so much. Interestingly, Kotaku's Mike Fahey has posted some thoughts on the arrival of SMG, and I found his assessment to be extremely fair and well-written...not to mention getting me totally psyched for the game! (Granted, I haven't played the thing either, even though I've seen it in action once or twice and heard from those who got to try it that it was awesome.) Kudos to Kotaku and Mr. Fahey for this entertaining review.

Finally, I spent a little time last night on the Wii's recently-launched "Check Mii Out" channel. (Stand by as I taste the "Check Mii Out" channel like a fine nerd wine.) "I find it to be fun, yet somewhat disappointing. And with a hint of unseen potential." Good: the "popular" Miis that you can browse are a total hoot, and you can download your favorites directly to your console. Last night, I saw amazing Mii versions of Darth Vader (pictured), Jack Black, Michael Jackson, Albert Einstein, Charlie Brown, that guy from Naruto, Dr. Zoidberg and more. Also good: you can enter your own Mii creations into contests. (Current contest: Mario without his hat.) Bad: It is not clear how you can track the Miis you upload. For example, I uploaded a Samurai Jack Mii and a Dexter Mii. How do I know if anyone "checks Mii out"? Do I have to hope that, in the off-chance, my creations appear in the Top 50? Not likely! This kinda sucks, but can probably be easily improved with a "track my Miis" feature later. Also bad: you can browse Miis both "in your area" and "worldwide" but there is no indication of exactly where these Miis are being picked from. And what if I want to browse the Miis in New York, or in Michigan? Not an option. Also bad: you can't browse Miis by type, you can only see their "friends". Selecting Darth Vader's friends, for example, just pulled up a whole bunch of similar Darth Vader Miis. Bo-ring. Despite these flaws, I remained entertained throughout the "Check Mii Out" experience. I am still amazed at the variety one can create with the Mii tool set. I am actually starting to think that this particular feature of the Wii is sort of a sleeping giant. There are so many things that can be done with the Miis, especially once we get some more robust multiplayer games on the platform. Even in its early stages, the "Check Mii Out" channel shows lots of potential. And it is always exciting to see the proliferation of fun user-generated content, when it is so often just the opposite.
Posted by Matt at 4:05 PM