Okay, this is just amazing. I can't believe I'd never encountered this before, and thanks to KJ for bringing it to my attention. Apparently, back in the good ol' 1980s, bands were recording games on vinyl that could be played back on the ZX Spectrum. Not surprisingly, the majority of these bands were from the UK, where the Spectrum was most popular. (It never really took off in the USA, as far as I know.) How did it work? Listeners could dump audio "code" from the vinyl to tape and play the tape in their Spectrum. Sounds like a dicey proposition, but I suppose it worked. It's hilarious to think that, back in the day, an audio tape could contain a game. Heck, I remember playing "Hunt the Wumpus" off a tape on a Texas Instruments something-or-other. 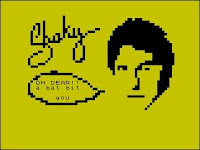 Anyway, even more incredibly, some of these games have survived and been preserved on the Interwebs. Why, you can play the Thompson Twins Adventure right now if you want to! It appears to be some kind of text adventure in which you try to prevent the Thompson Twins from dying of heat stroke. Maybe you can "lay hands on Thompson Twins" to give them a health boost! Har-de-har-har. Simply incredible. I applaud the geeks who took the time to make sure these random games didn't get lost into the ether. I don't have the time to really look into this at the moment (I shouldn't even be posting right now), but I plan to get back to this at some point and play these things. For example, how awesome is the following:

The goal of 'The Shaky Game' is to drive Shakin' Stevens' car to the center of a maze while avoiding bats, who bite you.

I love Shaky's line when the player dies:

Oh, Shaky, you gotta watch out for those bats!
Posted by Matt at 3:49 PM